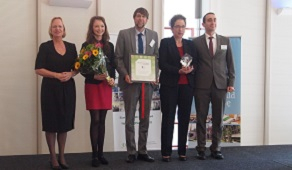 The BQ Portal addresses an issue of high-level political importance in Germany, namely skills shortages, and in the EU in the form of mutual recognition of qualifications. All relevant information on the equivalence of a wide range of foreign vocational training systems and individual foreign professional qualifications is consolidated in a single database. This is a unique initiative as it is the first portal of this kind at national or European level. The portal achieved significant results such as the impressive number of 73 country profiles and more than 1400 professional profiles. The high level of user satisfaction equally underlines the importance and relevance of this exceptional project. The project addresses a challenge that many European countries face and thus holds valuable lessons for other administrations.

The BQ Portal is funded by the Federal Ministry for Economic Affairs and Energy. The Cologne Institute for Economic Research (IW), the IFOK consulting firm, and the ]init[ IT company have been commissioned to implement the project.