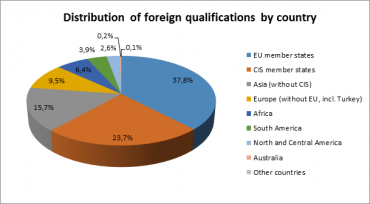 The specialist unit at the Research Institute for Vocational Education and Training (f-bb) evaluated the cases processed by the contact points of the “Integration through Qualification (IQ)” in the period from mid-2012 until the end of 2014. A total of 37.562 guidance services on recognition of foreign professional qualifications were provided all over Germany in this period. Those aged 25 to 44 made up 75.8 percent of people seeking counselling. Furthermore, far more women (63.2 percent) than men (36.8 percent) contacted the IQ advisory centers.
First training in the field of professional recognition successfully completed
In March the DGB training institute conducted the first training course “In-company Professionals for Recognition”. Overall, twelve participants attended the one-week training. The majority of them were the works and staff councils from various industry sectors and companies of different size.
Application procedure under the Recognition Act simplified
Following the revised EU Professional Qualifications Directive of 2013, the federal government made the application procedures for the assessment of foreign professional qualifications even simpler.
Angela Merkel visited IHK FOSA to find out more about the equivalence assessment process
On April 16, 2015 German Chancellor Angela Merkel visited the Chamber of Commerce and Industry Foreign Skills Approval (IHK FOSA) in Nuremberg. On her trip Federal Chancellor was accompanied by Johanna Wanka, the Federal Minister of Education and Research.
New project to limit organizational cost of qualification analyses
The Federal Ministry of Education launched the project “Prototyping Transfer – Professional Recognition through a Qualification Analysis” that is aimed to decrease the organizational cost of the qualification analyses, assure their quality and provide the applicants the financial assistance.
Increase in recognition of foreign professional qualifications
The Federal Statistic Office reports that almost 12,000 foreign professional qualifications were recognized in 2013. This contributes considerably to securing an adequate supply of skilled workers.
Improved labor market integration of foreign workers
According to a new OECD report, Germany is now the OECD’s second most important destination for permanent migration after the United States. As OECD expert Thomas Liebig claims, Germany is the central engine of migration in Europe. The inflow of foreigners to Germany experienced a double-digit growth with almost 465,000 migrants in 2013. This increase is driven primarily by migrants from Central, Eastern and Southern Europe.
More than 7,500 foreign professional qualifications recognised in 2012
WIESBADEN – In the whole of Germany, a total of 7,458 professional qualifications acquired in a foreign country were in 2012 recognised as being fully or partially equivalent to the relevant qualifications acquired in Germany.
Doors opened to immigrants with vocational qualifications
The new Employment Ordinance has been in force since 1 July. The list of occupations in which people with vocational training qualifications from non-EU countries can access the German labour market is now also in place. Following the "EU Blue Card" for the highly skilled, the improved recognition of foreign vocational qualifications and the relaxations in the rules for students from non-EU countries who wish to stay on to work in Germany, this is a further important step towards making it easier for workers from outside the EU to enter the German labour market and towards covering the skills gap in the German economy via migration.
Germany introduces new legislation to attract skilled workers
From 1 July onwards, skilled workers from non-EU countries will find it easier to relocate to Germany. On that date, the new Employment Act will come into effect, which is aimed at counteracting the current shortage of skilled workers and enhancing Germany’s position in the worldwide competition for qualified professionals. Not an easy task, as other large Western economies and newly industrialised countries are also adapting their immigration policies.
Related topics 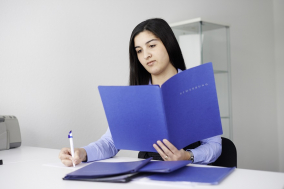 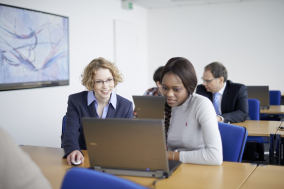