The specialist unit at the Research Institute for Vocational Education and Training (f-bb) evaluated the cases processed by the contact points of the “Integration through Qualification (IQ)” in the period from mid-2012 until the end of 2014. A total of 37.562 guidance services on recognition of foreign professional qualifications were provided all over Germany in this period. Those aged 25 to 44 made up 75.8 percent of people seeking counselling. Furthermore, far more women (63.2 percent) than men (36.8 percent) contacted the IQ advisory centers. 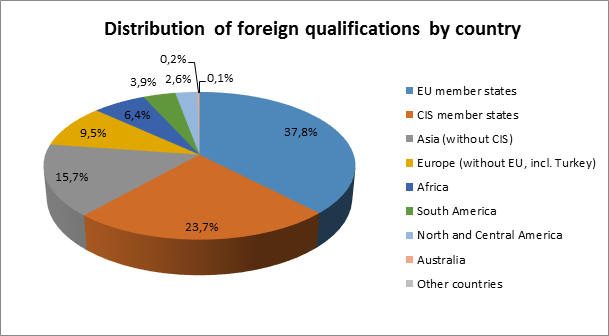 The enquiries were received on the qualifications from 166 different countries. Around one third of all qualifications was obtained in one of EU member states and around one fourth in one of CIS member states. Some 12.1 percent of those seeking advice are holders of German citizenship. Besides, many of those advised are Polish (10.1 percent), Russian (8.1 percent), Romanian (4.9 percent), Ukrainian (4.7 percent) or Turkish citizens (4.1. percent).  46.4 percent hold citizenship of one of EU member state. While the majority of enquiries (94.3 percent) originated from those living in Germany, only half of recognition seekers  reside in Germany longer than two years.

More than one third of those advised (36.0 percent) seek recognition in healthcare and social science occupations, while almost one fifth (17.4) is interested in recognition in the field of extraction and processing of raw materials.